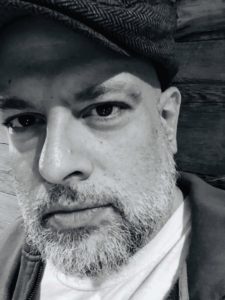 FRTT : Your future novel is over soon. I think I remember that you have another one also in preparation… Neither of those two will feature Boo and Junior. By the way, was it easy to let them on the bench after the warm welcome they received ?
Todd : Not as much as you’d think. I needed a palate cleanser. With the new novel, I wanted to stretch a bit, show that I’m capable of storytelling outside the world of Boo and Junior. That said, I was almost ninety pages into the new Boo and Junior novel before I realized that what I had down just wasn’t working. I needed some time away to refocus. The original plan for the new one was four to six months. It’s taken fourteen.
FRTT : And so, is this novel more like the short stories you wrote before ? What can you already tell us about it ? You told me you listened a lot The Road O.S.T. By Nick Cave and Warren Ellis during the writing, what does it bring into it ?
Todd : The new novel IS short stories. The narrative is composed of four stories that I’ve written over the last eight years. Characters and story weave out from one another, and I figured that if I broke those stories up and worked in some connective tissue, that there was a larger story to be told. That’s the challenge with short stories sometimes. The writer has to resist the urge to tell a larger story, especially when one feel that there’s one in there. Cut some of the meat from the bone. One of the stories in particular, a few people thought was selling itself short, that there was a novel lurking behind it. This larger-picture storytelling allows me the luxury of growing those stories out from the seeds. I always right to music, and these stories are emotionally harsh. Really, really dark, dealing with loss and grief and what it means to be a father, what it means to be a son, and all in a community where there’s not much hope left for either. THE ROAD Soundtrack dug right to the point of where I was trying to go, tonally. And THE ROAD itself touches upon those same dynamics, although I would never dream of being capable of going as dark as that book des or half as well. All I can do is reflect upon those themes in my own way.
FRTT : Jordan Harper, a guy you know pretty well, releases his first novel She Rides Shotgun here in France on March 2019. Can you introduce him to us and tell us a few things about his style ?
Todd : Jordan is just a remarkable talent. His way with character and prose is as good as anyone I’ve ever read. When I finished She Rides Shotgun, I called him. He answered the phone, and I just said, “Fuuuuuuck you.”
FRTT : Let’s talk about the U.S… The midterms were held not long ago, seen from France, it seems that it has raised much hope, but in the end it seems difficult to change things … what is it really, seen from the inside ?
Todd : It’s bad. Not to bring The Road back into it, but we’re now living in a similar thematic reality. How do we keep finding hope when every day, there’s a new item in the news that stamps it back out ? The midterms were a beginning, but it felt like freezing to death in a meat locker and suddenly you find a match. It’s nice, but it’s nowhere near enough. There’s an ugliness to America… INSIDE America… that has had the sheet pulled back from it. People like myself weren’t so fucking naïve as to think that it wasn’t there all along, but goddamn, that ugliness is more widespread and more vicious than we’d ever thought. We knew that it was there. Just not how much.
FRTT : The 5th question is what I call “The French Question” : Something french that inspires you or you liked recently ? (it can be a movie, food, wine…)
Chouquettes. Those goddamn things are like crack.
And finally, quick answers :
1 movie : It’s a Wonderful Life – Frank Capra
1 music : Social Distortion
1 meal : My grandmother’s chicken and rice
1 drink : Coffee
1 novel : A Childhood; a Biography of a Place by Harry Crews
1 trip : Man, I’ve always wanted to go to Japan. Mostly because I love Godzilla and samurai films.
Propos recueillis par Smith pour From Richmond To Tacoma – Traduction : Smith with a little help from my friend Silver – 2018
BostonGallmeisterInterviewNew YorkTodd Robinson